Between September and Christmas last year I was working at Merrist Wood College horticultural and nursery unit. It has been a great place to cut my teeth on horticultural skills and ask stupid questions and probably make a few mistakes without worrying too much about it. I was there to learn as much as possible from those who really know their stuff. It was with a heavy heart that I decided to look for work experience closer to home. As much as I am fuelled by an eagerness to learn all things plant related, my car is not. My budget is fine for the three days I need to be at college for lessons. On the plus side, I still see the team on those days too. 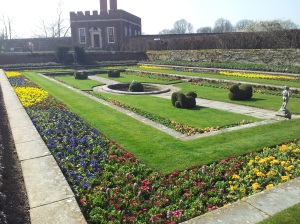 I could not believe my luck when a volunteer position became available just down the road from me. For the past month I’ve been working at Hampton Court Palace Gardens one day a week. It has been great and now I am half way through my National Diploma in Horticulture, I feel much more confident in a gardens environment. I have been made to feel very welcome and I am well on my way to completing the 300 hours work experience necessary for the course. I still have a spare day in the week plus weekends to complete coursework. I felt I was all set. Then I received an invitation.

It came from the head gardener of National Trust’s beautiful gardens at Nymans on the Sussex Weald. I hold my hands up and admit I had not heard of the place until I started following Nymans on twitter. On the promise of being shown some well flocculated sandy loam by @nymansed, I jumped in the car and headed south. If you have the opportunity, I urge you to visit. Actually, scrub that. Make time to go there. It is truly breathtaking, with stunning views of the South Downs. I was treated to a two hour enthusiastic information onslaught. It was essentially one to one private tuition on my favourite subject.

I really cannot do it justice here on just how incredible I found this place. So of course, you can imagine my response when I was offered the opportunity of working there voluntarily one day a week with a high level of supervision and training and petrol covered. Well, I went against my impulse to say ‘YES!’ and said I would think about it. I have just four months of my course left. The coursework is piling up to scary altitudes and I am on target of reaching the 300hours without this extra experience, which is probably a nasty commute on the M25, let alone that bit of motorway past Gatwick. In fact, I have little to no spare time. I slept on it. Spoke to my mum. Spoke to my boyfriend. When I say spoke, what I mean is I told them that I had been offered a dream role and I was going to do it and to hell with the consequences. With their support and understanding, I contacted Nymans and organised to start next week. Initially, I’m aiming for a 07.30 start in an attempt to avoid the traffic. I am hoping this will change to a later time once I have a feel for traffic issues. I chatted to my tutors and explained my concerns that a ‘distinction’ would be a push with working two days a week, but I am still aiming for it.

I only have a few months left before I receive my qualification. It’s not long in the grand scheme of things and it is a short term sacrifice for a long term gain. I promise I will try to cling on to that thought when my alarm goes off early on Monday morning.